A Father’s Bond with His Son 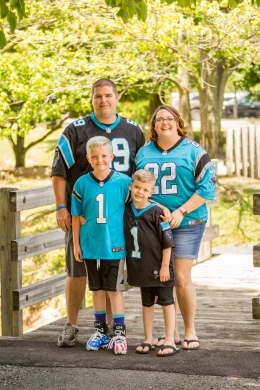 Domanic wanted nothing more than to become a Carolina Panther for just one day, as he has been a lifelong Panthers fan! Not only are the Carolina Panthers special to Domanic, but the team has even enriched his relationship with his father. Domanic and his dad have spent countless hours watching games together over the years and bonding over their love of the team.

Domanic’s wish came true when he was flown to Charlotte, North Carolina to visit the Panthers team facility.  At the event, Domanic started the event by signing a one-day contract with the Panthers.  He was able to receive his very own Panthers equipment, meet the players, attend team meetings and was even given his own locker with his name on it!  Domanic was on the field with the Panthers during warmups, spending time with his two favorite players, Cam Newton and Luke Kuechly.

When talking about his wish experience, Domanic says his favorite parts of the day consisted of being in the locker room with the players and getting to hang out with them, as well as being on the field practicing with the team.

His mom says, “Domanic was over the moon excited when Cam Newton gave him a pair of cleats that matched his, and told Domanic there are only two pairs of these in the world, his and Cam’s.” The joy that Domanic and his family experienced, because of how willing and invested the players were in making Domanic’s wish as special as possible, is something that Domanic’s family will cherish forever. “Domanic’s wish meant the world to us,” his mom said.  “We couldn’t have asked for anything more.”

After receiving his wish, Domanic was a celebrity! Everyone in his small hometown in Lewis County knew of Domanic’s trip to spend a day with the Carolina Panthers. When the family returned to the airport, people asked to take pictures with Domanic. He had fans, and he was now a part of his favorite team!