On October 5, 2014, our 5-year-old daughter, Violet, had been complaining that her belly hurt for a couple of days. Not one to cry in pain, we were worried there was something besides constipation going on and took her to the local children’s emergency room. Because she could point to exactly where it was hurting her, the doctor wanted an ultrasound done to check her appendix. The appendix looked fine, but the technician noticed an “abnormal mass” in her pelvic area. By the time the doctor had told us this, she had already contacted the Pediatric Hematology-Oncology group in Rochester and let them know we’d be coming up the next day. After consulting with the oncologist, pediatric surgeon, and pediatric gynecologist, she had surgery on October 16 to remove the mass. One agonizing week later, we learned it turned out to be a rare Stage 1C Sertoli-Lydig tumor on her ovary.

Violet bravely endured and rarely complained during her three months of chemo treatments and hospital stays. Even when her hair started falling out on Christmas Day…she smiled through it all. At our very first hospital visit in November, a representative from CURE (a Rochester-based association that provides support to parents and raises money for cancer research) mentioned that Violet was eligible for Make-A-Wish. I kind of brushed it off, though. Violet was going to be fine. She wouldn’t qualify. Make-A-Wish was for kids who were terminal, right? But at the end of her treatment, after things had settled down, I remembered what the representative had said and got on the MAW website and submitted Violet’s information. She was such a sweet little trooper through everything….it was worth a shot, right?

Our initial meeting with Joseph and Rebecca (Violet’s Wish Granters) was wonderful…Joseph took his time getting to know Violet while Rebecca got through the paperwork with me and my husband. It was rather surreal. I had tears when Violet came back in the room and told us her wish… to go to Disney and meet Elsa. The enormity of even the possibility of that trip was unbelievable.

Fast-forward to July.  Our Make-A-Wish trip to Disney – What. A. Trip. It was July in Florida with a 3 and 5-year-old, so, it definitely had its drama, but overall, it was AMAZING. Seriously, a “trip of a lifetime.”

Here’s a quick recap:
Wednesday
A Hummer limo in our driveway at 9am.  That’s how we started the trip!  Our wish grantor, Joseph, met us at the airport in Syracuse. We had a letter from Make-A-Wish that got us to see the cockpit and talk to the captains. We were greeted at check-in with a Mickey Mouse for Violet and a Shamu for Sabrina. We knew this place was going to be amazing.

Thursday
The plan today was to go to Magic Kingdom first thing and then just play it by ear. We figured we’d be ready to come home in the afternoon and chill out at the resort the rest of the day. Ha. We stayed until the fireworks were going off. It truly was magical. We saw every princess, rode every ride we wanted to, and had lunch in Belle’s Castle. We were spoiled beyond anything I ever expected!

Friday
Needless to say, after our day at the Magic Kingdom, on Friday we slept in. That morning was “Christmas in July” at the resort, so the girls (ok, and we grownups, too) had ice cream for breakfast. And then I was able to sign up the girls for Mermaid Academy at the pool.  They were THRILLED!  We did a half day at Sea World and were treated, again, to front row seats to see the orca show. To Violet’s chagrin, we didn’t get too wet/splashed, but we could look into that killer whale’s eyeball when he flopped up on the stage directly in front of us.  So cool!

Saturday
Saturday morning we had the big Elsa personal meet-n-greet at 9:30a.m. in the Wish Lounge at Magic Kingdom. The girls were SO SHY. I give so much credit to those Disney characters, they are in character the entire time and Elsa was really great about trying to engage Violet. It was a super special meeting.

Sunday
We went to Universal Studios on this day. Spent some time in the Dr. Suess world, rode a coaster in the Harry Potter section and had a REALLY nice lunch. The Make-A-Wish connection comes through, yet again.  That afternoon, we went back to the hotel for, you guessed it, the pool. 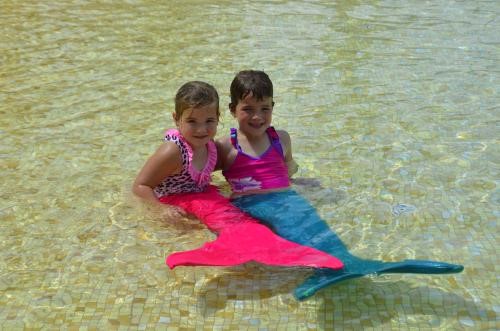 Monday
Our last day. Disney characters were at our resort in the morning, so we said Hello again to Mickey, Pluto, and Mary Poppins, then headed to Animal Kingdom. We also got to see some more characters there (without waiting in line). After Animal Kingdom, we went to Hollywood Studios and had lunch with some Disney characters and watched the Frozen show (front row, of course). By then, the girls were tired, so rather than push them farther, we went back to the resort for one last pool night and relaxing.

We were 100% truly spoiled on this trip. I’m not joking when I tell people that I’m not sure we could ever go back! At least not until the girls understand the concept of “waiting in lines.” But while I often felt guilty about cutting in lines to see Minnie Mouse or Donald, I had to remind myself what Violet had gone through to get there. I’m also sure, if given the choice between waiting a long time to hug Pluto and receiving a cancer diagnosis, those families would choose to stick it out in line.

Make-A-Wish is such an amazing organization and we will forever be grateful to them for providing this trip-of-a-lifetime to our family.