My son Kyle was diagnosed with a malignant brain tumor in December of 2013. Kyle is a HUGE sports fan – I can see him being a commentator someday – and he loves the state’s sports teams -New York Yankees, New York Knicks, New York Rangers and New York Giants. 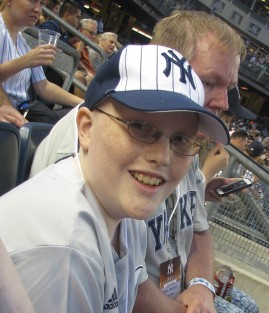 In March of 2013, Kyle started radiation to try to shrink the inoperable tumor. He endured 31 rounds of chemo and radiation. The radiation was working, the tumor was shrinking as we had wished. Then Kyle started the first of six intense chemo treatments in May of 2013, one treatment a month. This was a roller coaster ride from hell; anything that could go wrong did, from sickness to infections to counts not wanting to rebound to kidney failure.

In between all this Make-A-Wish® wanted to know what Kyle’s wish would be. With the help of our wish granters Dave and Julie Eddy, Kyle decided he wanted to meet the New York Yankees. It was Derek Jeter’s last year playing baseball before he retired. We picked a game date of July 26, never really knowing if Kyle’s health would actually allow him to go. But it all worked out in the end.

On Wednesday, July 23, a big, black stretch limo came to our house and picked us up and took us the Syracuse airport. We flew Jet Blue airlines to JFK where we were escorted to our hotel – The Hampton Inn in Times Square! Make-A-Wish® had arranged for a wheelchair to be delivered to the hotel for Kyle so we could walk around NYC and see the sites. They also arranged for us to take a tour of the Statue of Liberty and Ellis Island and to view the city from the Empire State building’s 86th floor! We also went to the 9/11 memorial and took a horse-and-carriage ride around Central Park.

Then on Friday afternoon another stretch limo pulled up in front of our hotel. We were met by a Make-A-Wish® representative who accompanied us to Yankee Stadium! What an amazing experience for all of us! When I say “we” I am talking about Mom, Dad, Kyle and his twin sister Kali.  Kyle was given a whole bunch of presents, including a book, a bat, a ball for signatures, a hat and a replica of the 2000 World Series Ring!

After a tour of the stadium, we were escorted to the field where the New York Yankees were having batting practice. Kyle and Dad were allowed to sit in the dugout! Who was the first person to sit by Kyle and sign his ball? DEREK JETER!! He also got his picture taken with several others, including Joe Girardi, Chase Headley, David Robinson, and Brett Gardner, among others. We then got to eat at the amazing buffet at the stadium and watch the New York Yankees take on the Toronto Blue Jays from 14 seats back. They won 6-4.

When asked what the most memorable part of the trip was, Kyle will simply tell you, “All of it!!”  Thank you Make-A-Wish® Central New York for allowing Kyle to have this remarkable experience and to give him the break we all needed from the hospital scene!