It has been 3 ½ years since I met Matt Murphy. While I only knew Matt for a short time, the impact he had on me was substantial. Matt and I met at Fox Fire Golf Course in July of 2011 at the Sherwin-Williams annual golf outing. It was our 3rd year hosting the tournament as a fundraiser for MAW, and the 12th year overall. As District Manager, I would play with a wish kid and one of our customers. Completing our foursome was Matt’s father, Kevin, and Bill Rock from Rock Painting. 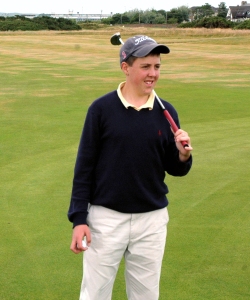 Matt was a terrific golfer but even better man. I could see right away that he lived everyday to make the lives of those around him better. During our five hours on the golf course we joked, laughed, and made fun of the Yankees (Matt was a huge Red Sox fan like me). It was as if I had known Matt for years and I could tell he was extremely gifted, as a golfer, son, brother, and human being.

During our round, I could see that Kevin was really enjoying this time with his son. I also could see that despite having fun, that something was wrong. Kevin was hesitant to have Matt speak to the golfers at the banquet dinner afterwards and sadly the reason was because Matt’s cancer was back. The Murphy family had found out only a few days prior, but Kevin and Matt still played golf that day and Matt insisted on speaking. And boy did he speak! His message of living life and loving family was so moving, so powerful. He brought every golfer in that room to their feet that day and some to tears.

When Make-A-Wish called me on October 20th less than three months after our outing to tell me Matt had died, I was so stricken with grief. I called Bill Rock right away and we talked about how lucky we were to have met Matt and his dad. I went to the calling hours and when Kevin thanked me and told me that was the last time he ever golfed with Matt, I realized that even though Make-A-Wish and all its supporters cannot save every child, it can allow those kids to live on in others. I carry a picture of Matt in my wallet to remember him and to remind myself to make a difference in the lives of others every day, the way he did. Matt Murphy lives on in me, his family, and the lives of so many people he knew. Thank you for allowing me the opportunity to have met Matt. I am a better father, husband, and friend because I did.